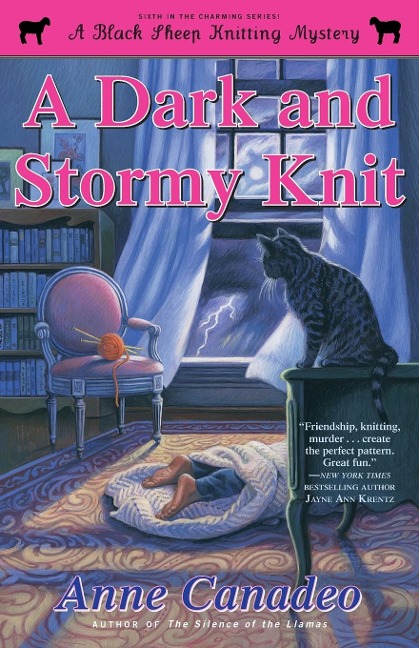 In the sixth novel in the series that is "sure to hook cozy fans" (Publishers Weekly) the Black Sheep Knitters must work to solve the mystery of the disappearance of their friend--and figure out who is trying to kill her before it's too late. Knitting graffiti, in Plum Harbor? Maggie Messina doubts it could ever happen in her quiet village. Until the new parking meters on Main Street are found covered with cat-faced cozies. In the dark of night, the mysterious Knit Kats have struck again  The infamous gang of stitching graffiti artists are totally harmless, and their pranks all in good fun. Or so Maggie and her friends think. Until a yarn-covered corpse is discovered a few days later--the tangles identical to Knit Kat handiwork. These threads of evidence should be easy to follow. But the clever Knit Kats hide behind a website and secret identities. The murderer could be anyone. A familiar face in town, even a copy Kat. But when Maggie's assistant, Phoebe, becomes the prime suspect, the knitting friends know the police have dropped a few stitches. With no time to rest on their needles, the Black Sheep set out to unmask the crafty killer. No simple task, when all Knit Kats look the same in the dark.

Anne Canadeo is the author of many works of fiction. She is best known for the acclaimed Black Sheep Knitting Mysteries and the New York Times bestselling Cape Light and Angel Island series. Anne lives with her husband, daughter, and a scruffy Retriever in Northport, New York-a village on the Long Island Sound very much like the towns depicted in her books. She has a Masters Degree from Columbia University and a Bachelor of Arts from Stony Brook University.