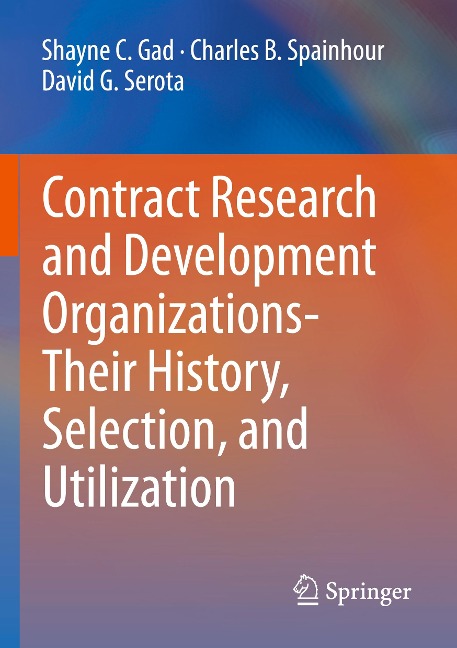 This volume provides a complete update of all the materials in prior volumes on the subject (including current directories to testing labs and other support establishments worldwide), while adding substantial new material on the following topics:

· The history of CROs, including snapshots of CROs and a genealogy chart making clear where they came from and where they went.

· The nuts and bolts of study performance.

· Consultants and their roles.

· An expanded examination of common problems and their solutions.

This book boasts complete directories to the global universe of operating labs - where they are, how to contact them, and what they do (including special capabilities). Additionally, checklists for qualifying labs and manufacturing facilities - and for auditing studies and projects at such facilities - are included. It is directed at those in industry (specifically directed at those working for companies using CRO services) but will also be of interest to scientists or administrators working in research organizations themselves.

In this case, the contents of this new work are essential to the target reader because the work, regulations, and actors (CROs) have evolved and changed at a rapid pace in the 10 years since the earlier volume that the author published. Likewise, the companies using these services have come to all be almost completely dependent on outsourcing. The earlier texts remain the only source of their kind (paper or electronic) on the field and the only noncommercial guide to the global industry and this volume provides a complete update.
Taschenbuch 07/2021
(0) - Geben Sie die erste Bewertung ab
kostenloser Standardversand in DE gewöhnlich ca. 4-5 Werktage (Print on Demand)

Dr. Shayne Gad has över 43 years experience as a toxicologist, statistical consultant, manager and consultant on research and development in the chemical, consumer product, contract testing, biotechnology, medical device, and pharmaceutical industries. He is experienced in occupational and industrial toxicology, development programs (both preclinical and clinical) and study design, conduct and reporting, in evaluating clinical and product safety data, in training and managing staff; in dealing with a wide range of U.S. and foreign regulatory bodies, commercial concerns, and contract research organizations; in labeling and other FDA and EMA compliance issues for drugs, devices and dietary supplements; identifying, developing and putting into everyday use new technology; in writing reports, position papers, Safety Data Sheets, MAA/PLA/IND/NDA/PNA toxicology and pharmacokinetic summaries and package inserts; in preparing and maintaining INDs, MMFs, NDAs , DMFs, IDEs and 510(k)s; in preparing labels and package inserts for drugs, devices, combination products and consumer products; in presentations to FDA and in designing experiments, designing and executing surveys; in the pharmacokinetic and statistical analysis of both experimental and clinical data; in risk assessment; in Proposition 65 assessments and labeling; in the registration of OTC, dietary supplement, nutraceutical, and sterilant products with FDA; and in the development and production of biologic products. This is his 52nd published book.

Dr. Spainhour has amassed approximately fifty years of experience in the pharmaceutical industry. For his first fifteen years Bart worked at a company known then as Smith Kline & French Laboratories and now as GlaxoSmithKline Corp., where he held positions in both the discovery and the development segments of the drug development process. Specifically, on the research side Dr. Spainhour's activities involved the areas of phosphodiesterase inhibition, anti-diuretic hormone agonism and antagonism, dopamine agonism and antagonism, neuroleptic biochemistry, anti-infective mechanisms and structure-activity-relationships. On the development side, Bart worked in pharmacokinetics & metabolism, radiosynthesis, process chemistry and drug safety evaluation. Specific areas of drug development included H2-antagonists, leukotrienes, anti-infectives, anti-hypertensives, anti-hyperglycemic agents and anti-arrhythmics. Dr. Spainhour has a great interest and copious amount of experience in the discovery and development of natural products. Bart has also worked as an independent consultant in the areas of safety assessment and forensic toxicology, held a position on the faculty at the school of veterinary medicine at Texas A & M University and worked as a toxicologist in the CRO Industry for Pharmakon Research International, Chrysalis International, Phoenix International Life Sciences, MDS Pharma Services and Calvert Laboratories. Currently Dr. Spainhour serves as the Executive Vice President and Chief Scientific Officer for Calvert Laboratories, a company which grew and flourished under Bart's leadership into the highly-respected CRO that Calvert is today. Bart is also the Chief Scientific Officer for Calvert Holdings and is the President and Chief Scientist of Spainhour & Associates, LLC. Dr. Spainhour has designed and overseen the execution of many hundreds of safety assessment programs (IND, NDA,505(b)2, PLA, ANDA, IDE, 510(k)) for virtually every indication in the Physician's Desk Reference, with none of the programs ever encountering any negative feedback from any world-wide regulatory agency, with regard to design or execution. Dr. Spainhour's experience encompasses small molecules, peptides, proteins, chiral chemicals, biotechnology products, nanoparticles, liposomal formulations, combination products, nutraceuticals, OTC products, and medical devices. Dr. Spainhour holds a veterinary degree from the University of Pennsylvania and a Ph.D. from Texas A & M University (Developmental Toxicology), and is board certified in forensic science, toxicology and forensic medicine. In his spare time Bart enjoys gardening, photography, cabinet-making and field trial training his Labrador Retrievers.
Dr. David Serota has over 43 years of experience as a toxicologist, with the first 40 years all in the preclinical contract research industry as both a senior scientist and as a senior leader. He has served as a Study Director on over 1000 studies involving most routes of compound administration in all common animal models and involving a large variety of clinical indications. He spent his first 15 years at Hazleton Laboratories in Vienna, Virginia where he served as a Senior Study Director and Director of Laboratory Operations. Moving to Southern Research Institute in Birmingham, Alabama in 1991 as Director of Toxicology, he left to join the staff of a new contract research organization, MPI Research in Mattawan, Michigan in 1997. During his 20 years there, he played a critical role in leading MPI Research to unprecedented success by becoming the third largest CRO in he world with the largest single site facility in the world (over one million square feet and approximately 600 animal rooms). He held numerous scientific and leadership roles there, retiring in 2016 as Senior Principal Study Director, Senior Vice President, and Director of Research. Following his retirement, Dr. Serota created an independent toxicology consulting company, 7th Inning Stretch Consulting LLC, which focuses on assisting companies in working with preclinical contract research organizations, including study designs and interpretations, and study monitoring. Dr. Serota received a B.S. in Pharmacy from Auburn University in 1969, a doctorate in toxicology from the University of Tennessee Center for the Health Sciences in 1976, and became a board-certified toxicologist in 1981, re-certifying every five years since. He is a 30+ year member of the Society of Toxicology and a 40-year member of the American College of Toxicology, where he served as President in 2012, and received the organization's Distinguished Service Award in 2015. Dr. Serota is considered an excellent public speaker and has presented a wide range of scientific topics at numerous forums. Over the years, Dr. Serota has remained engaged with numerous educational and philanthropic organizations and has contributed significantly to these organizations in terms of time and money. He currently serves on the Dean's Advisory Council at Auburn University's School of Pharmacy and on the local SPCA Board of Directors where he is a past president.