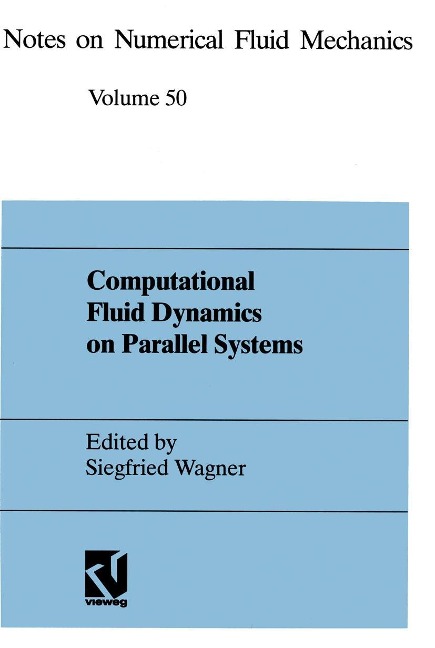 Proceedings of a CNRS-DFG Symposium in Stuttgart, December 9 and 10, 1993

Within the DFG -Schwerpunktprogramm "Stromungssimulation mit Hochleistungsrechnern" and within the activities of the French-German cooperation of CNRS and DFG a DFG symposium on "Computational Fluid Dynamics (CFD) on Parallel Systems" was organized at the Institut fur Aerodynamik and Gasdynamik of the Stuttgart University, 9-10 December 1993. This symposium was attended by 37 scientists. The scientific program consisted of 18 papers that considered finite element, finite volume and a two step Taylor­ Galerkin algorithm for the numerical solution of the Euler and Navier-Stokes equations on massively parallel computers with MIMD and SIMD architecture and on work station clusters. Incompressible and compressible, steady and unsteady flows were considered including turbu­ lent combustion with complex chemistry. Structured and unstructured grids were used. High numerical efficiency was demonstrated by multiplicative, additive and multigrid methods. Shared memory, virtual shared memory and distributed memory systems were investigated, in some cases based on an automatic grid partitioning technique. Various methods for domain decomposition were investigated. The key point of these methods is the resolution of the inter­ face problem because the matrix involved can be block dense. Multilevel decomposition can be very efficient using multifrontal algorithm. The numerical methods include explicit and implicit schemes. In the latter case the system of equations is often solved by a Gauss -Seidel line re­ laxation technique.