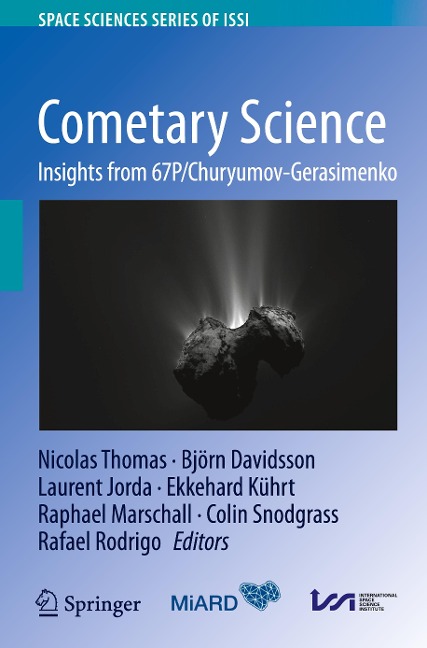 This book gives a status report on where we stand today in studies of cometary nuclei and their immediate environment. The papers were derived from a Horizon 2020 project called MiARD (Multi-instrument Analysis of Rosetta Data), which was designed to use multiple datasets from the Rosetta mission to comet 67P/Churyumov-Gerasimenko to place further constraints on the properties of the nucleus of the comet and its immediate environment.

The individual chapters are the result of a significant effort by leading researchers to establish clear statements on what we know from current cometary data. Based on a workshop held in 2018 at the International Space Sciences Institute, the book focuses on the nucleus itself and the relationship between the surface properties and the observed outgassing. Additionally, it makes a first critical assessment of the Rosetta dataset, establishing what would be an appropriate next step in cometary research.

Nicolas Thomas gained his PhD at the University of York in 1986 and, after working at the European Space Research and Technology Centre in Noordwijk and the Max-Planck-Inst. für Aeronomie in Katlenburg-Lindau, he became professor of experimental physics at the University of Bern in 2003. He has worked on numerous space missions connected to comets such as Giotto, the Giotto Extended Mission and NASA's Deep Space 1 as well as several other missions connected to Solar System targets. He leads a research group that studies cometary dusty-gas dynamics, polar processes on Mars and atmosphere-magnetosphere interactions at Io, through modelling, data analysis and laboratory experiment. He is PI of the CaSSIS instrument for ESA's ExoMars Trace Gas Orbiter and of the Comet Camera (CoCa) on ESA's new cometary mission, Comet Interceptor.

Dr. Davidsson earned a Ph.D. in Theoretical Astrophysics at Uppsala University, Sweden, in 2003. He is an expert on the physical properties of comet nuclei, and particularly, on computer modeling of the thermophysics of small icy Solar System bodies. He is currently working as a Scientist at NASA's Jet Propulsion Laboratory, California Institute of Technology.
L. Jorda got his PhD diploma at the University of Paris 7 (Jussieu) in 1995. He spent 1 years at ESO La Silla Observatory (Chile) as "scientific cooperant", and 4 years as postdoc at the Max-Planck Institut for Solar System Research (Germany). L. Jorda is assistant astronomer at Laboratoire d'Astrophysique de Marseille (France) since 2000. He has been involved in the ROSETTA space mission as Co-I of the OSIRIS and CIVA-P instruments. He played a major role as coordinator of the 3D reconstruction effort for the Rosetta/OSIRIS consortium. L. Jorda is also co-author of more than 200 refereed publications on meteorites and small bodies (comets, asteroids and TNOs).

Ekkehard Kührt received his PhD at the Humboldt-University of Berlin in 1982. His scientific career began at the East-German Institute of Cosmic Research where he contributed to the Russian space missions VEGA and Phobos. After a 2 years stay at the Max-Planck-Institute of Aeronomy in Katlenburg-Lindau with a research grant of Leopoldina Academy he started his scientific engagement at the German Aerospace Center in 1992 where he was head of department "Asteroids&Comets" in the Institute of Planetary Research from 1997 to 2020. He has been and is directly involved in many space missions as Rosetta, BepiColombo, Hayabus-2, MMX, Comet Interceptor.

He is the first or co-author of more than 250 scientific publications, holds 4 patents and managed international research projects as Rosetta and MiARD in responsible position.
Dr. Marschall completed a MSc in theoretical Physics at the University of Bern in 2012 before switching to planetary physics for his doctoral studies. As a doctoral student, he researched the inner gas and dust comae of comets, specifically that of comet 67P/Churyumov-Gerasimenko, using data from ESA's Rosetta spacecraft and complex 3D gas and dust dynamics models. After completing his PhD in 2017 he moved to the International Space Science Institue for his first Postdoc continuing his work on cometary activity. In 2019 he won an Early Postdoc.Mobility grant from the Swiss National Science Foundation to join NASA's Lucy mission at the Southwest Research Institute in Boulder (CO, USA) to study the collisional and dynamical evolution of the Jovian Trojans.
Colin Snodgrass is an astronomer and planetary scientist specialising in observations of comets. He obtained his PhD in 2006 from Queen's University Belfast in Northern Ireland, and has worked at the European Southern Observatory in Chile, the Max Planck Institute for Solar System Research in Germany, and the Open University in England before returning to his native Scotland and a faculty position at the University of Edinburgh. He was part of the OSIRIS camera team on Rosetta, and coordinated the worldwide campaign of telescopic observations of 67P in support of this mission. He is now deputy PI on the ESA Comet Interceptor mission.
Rafael Rodrigo (PhD at the University of Granada in 1979) has been Director of the Institute of Astrophysics of Andalusia (1990-2004), where he was directly involved in the direction of many projects on Solar System Exploration. He has been the President of the Spanish National Research Council (CSIC) (2008-2012). He has been or is involved in many space missions (Rosetta, Cassini-Huygens, Mars Express, Bepi-Colombo, JUICE). He is currently a Research Professor at the Centro de Astrobiologia (CSIC), Madrid, and former Executive Director of the International Space Science Institute in Bern, Switzerland (2012-2018). Presently he is General Secretary for Research at the Spanish Ministry of Science and Innovation. He is the author or co-author of more than 300 scientific publications.