Coherence and the textual function in "The curious incident of the dog in... – Marieke Jochimsen | buch7 – Der soziale Buchhandel
Bitte warten ... 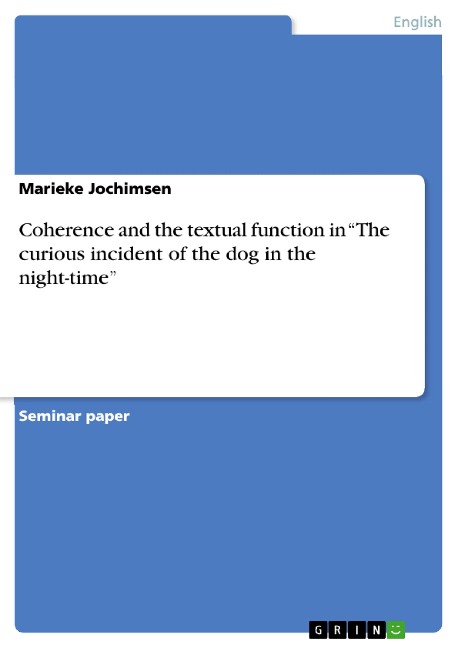 Seminar paper from the year 2008 in the subject English Language and Literature Studies - Linguistics, grade: 2,0, University of Münster (Englisches Seminar), course: Systemic Functional Linguistics, language: English, abstract: "Wherever we look, we see language constituting the world [...], not just reflecting it. For instance, the words for colours make a reality, they don't just name things which are 'there': the spectrum isn't divided into seven primary colours; all the colours merge into one another."

According to structural linguistics, by using language, we are not reflecting a given reality but are rather construing one. Systemic functional grammar, developed by M. A. K. Halliday, states just this construal feature of language as well: That language functions to make meanings (and not to only refer to the outside world). But furthermore elaborates on how a text makes those meanings. It focuses therefore on the functional description of language.
The basic assumption is that language use is always functional: "people do not 'just talk' or 'just write'"2 but rather any use of language serves a specific purpose, namely to make meanings. The primary concern of systemic functional linguistics can therefore be summed up under the questions: "How is language structured for use?"3  How does it make meanings?
According to Halliday, language makes meanings on three different levels simultaneously: on the experiental level, because it represents experience, on the interpersonal level, because language is used to interact with each other and on the textual level, because we organize our message somehow.
This research paper will focus on the textual metafunction of language, which is the theory of the clause being organized as a message. The aim is to show that text itself construes the context by involving meaningful choices concerning what to put in thematic position and by means of cohesion. Thus, context is not on