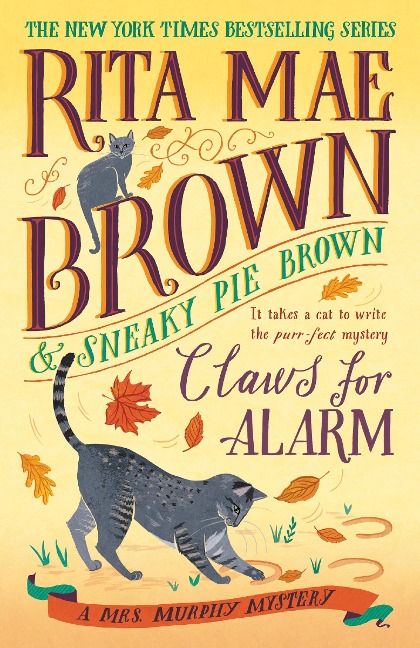 Mary Minor "Harry" Haristeen gets a little help from her veterinarian husband to solve the murder of a young equine vet whose death may be linked to his new clinic in Claws for Alarm, a tantalizing mystery from Rita Mae Brown and her feline co-author Sneaky Pie Brown.

Pharamond "Fair" Haristeen is known throughout Crozet, Virginia, as a good horse vet and a better man. So when Benjamin Wagner, a new vet in town, is found dead in his unopened clinic, local police turn to Fair for help getting to the bottom of things. Fair quickly realizes Ben's clinic has been robbed of ketamine, used by doctors as a horse tranquilizer but also a popular recreational drug. Then Fair's own ketamine goes missing from the back of his truck. Was Ben killed for his supply? Or was he mixed up in something bigger?

Meanwhile, Candida Perez, one of Crozet's oldest and most beloved citizens, is found dead at her desk. Not so alarming, given her ninety years of life. But the bickering of her children, Ballard and Constance, over her will and the family's valuable collection of historical letters threatens to drive the rest of the town to madness. Harry tries to play peacemaker, but the bad blood between the two siblings runs deep. Just how far will they take their family squabble?

With a little aid from hungry helpers Tee Tucker the corgi and sweet puppy Pirate, as well as feline sleuths Mrs. Murphy and Pewter, Harry and Fair team up to restore justice-and maybe a little peace and quiet-in Claws for Alarm.

Rita Mae Brown is the bestselling author of the Sneaky Pie Brown mysteries; the Sister Jane series; the Runnymede novels, including Six of One and Cakewalk; A Nose for Justice and Murder Unleashed; Rubyfruit Jungle; and In Her Day; as well as many other books. An Emmy-nominated screenwriter and a poet, Brown lives in Afton, Virginia, and is a Master of Foxhounds and the huntsman.