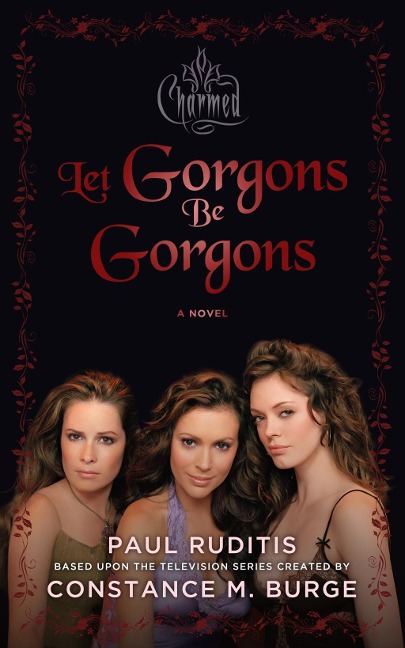 When Piper, Phoebe, and Paige undo a spell that turned a local politician to stone, they little realize the powerful magic behind the hex. As attacks on innocents mount, The Charmed Ones enlist the help of their sister, Prue, confined on the magical Nexus, only to learn that the most heinous of mythical creatures-a gorgon-is to blame.

Freed from her underground tomb, Medusa joins her sisters in a crusade to avenge womankind, turning those who cross her to stone forever. At the same time, dark magic seems to be undoing all of Phoebe's good works, distracting her from the impending battle with the gorgons. With time running out, will the sisters be able to defeat Medusa and restore their innocents to life?

Inspired by the hit televisions series Charmed, the new novel Charmed: Let Gorgons Be Gorgons continues the story of the Halliwell witches. With only the Book of Shadows to guide them, the Halliwell sisters are the fulfillment of their ancestor Melinda Warren's prophecy that three sisters descendin from her line would become the most powerful witches of all time. The sisters use the Power of Three to protect the innocent and banish evil from the Earthly realm.

Paul Ruditis has written numerous companion books and novels for TV shows like Battlestar Galactica, Buffy the Vampire Slayer, Star Trek, The Walking Dead, and The West Wing. He has co-authored both of the official Charmed episode guides and has written several earlier Charmed novels, as well as the New York Times bestselling comic book series revealing the show's "unaired” ninth season.