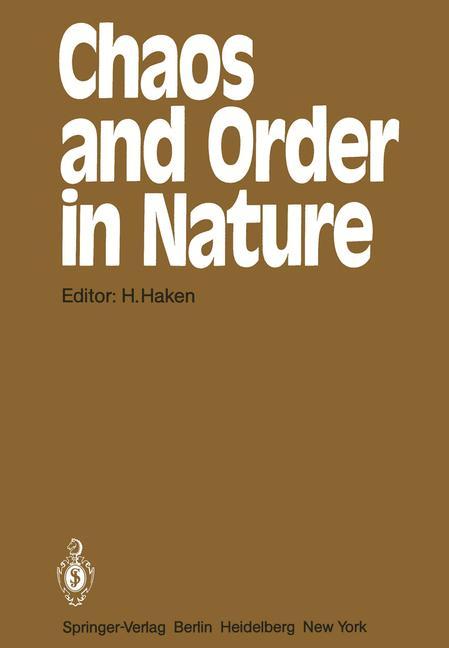 Chaos and Order in Nature

Proceedings of the International Symposium on Synergetics at Schloß Elmau, Bavaria April 27 - May 2, 1981

This book contains the invited papers of an international symposium on synergetics; which was held at Schlol3 Elmau, Bavaria, FRG, April 27 to May 1, 1981. At our previous meetings on synergetics the self-organized formation of structures in quite different disciplines stood in the foreground of our interest. More recently it has turned out that phenomena characterized by the word "chaos" appear in various disciplines, and again far-reaching analogies in the behavior of quite different systems become visible. Therefore this meeting was devoted not only to problems connected with the occurrence of ordered structures but also to most recent results obtained in the study of chaotic motion. In the strict mathematical sense we are dealing here with deterministic chaos, i. e. , irregular motion described by deter­ ministic equations. While in this relatively young fieJd of research computer ex­ periments and computer simulations predominated in the past, there now seems to be a change of trend, namely to study certain regular features of chaos by analytical metbods. I think considerable progress has been achieved in this respect quite recently. This theoretical work is paralleled by a number of very beautiful experi­ ments in different fields, e. g. , fluid dynamics, solid-state physics, and chemistry. For the first time at this kind of meeting we have included plasma physics, which presents a number of most fascinating problems with respect to instabilities, formation of structures, and related phenomena.