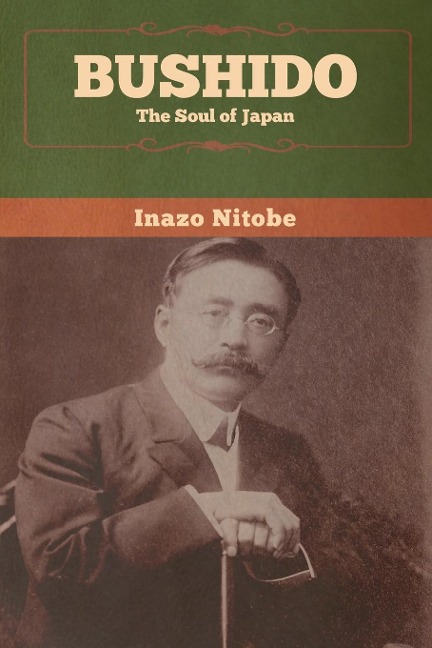 The Soul of Japan

Nitobe Inazo (September 1, 1862 - October 15, 1933) was a Japanese agricultural economist, author, educator, diplomat, politician, and Christian during the pre-World War II period.
Nitobe was born in Morioka, Mutsu Province (present-day Iwate Prefecture). His father Nitobe Jujiro was a retainer to the local daimyo of the Nanbu clan. His grandfather is Nitobe Tsuto. His great-grandfather is Nitobe Denzo [ja] (Koretami). His one of cousin is Nitobe Inao [ja]. His infant name was Inanosuke. Nitobe left Morioka for Tokyo in 1871 to become the heir to his uncle, Ota Tokitoshi, and adopted the name Ota Inazo. He later reverted to Nitobe when his an older brother Nitobe Shichiro died.
Nitobe was a prolific writer. He published many scholarly books as well as books for general readers. He also contributed hundreds of articles to popular magazines and newspapers. Nitobe, however, is perhaps most famous in the west for his work Bushido: The Soul of Japan (1900), which was one of the first major works on samurai ethics and Japanese culture written originally in English for Western readers (The book was subsequently translated into Japanese and many other languages). Although sometimes criticized as portraying the samurai in terms so Western as to take away some of their actual meaning, this book nonetheless was a pioneering work of its kind.
The reception and impact of Bushido: The Soul of Japan were quite different in Japan and the West, however, with Japanese scholars such as Inoue Tetsujiro and Tsuda Sokichi criticizing or dismissing the book. It was not until the 1980s that Bushido: The Soul of Japan reached the height of its popularity in Japan, and is now the most widely available work on the subject of bushido. In the West, Bushido: The Soul of Japan has been a best-seller since the outbreak of the Russo-Japanese War of 1904-05, and has been translated into dozens of languages.
Nitobe's writings are now available in Nitobe Inazo Zenshu (the Complete Works of Inazo Nitobe), a 25-volume set from Kyobunkan, 1969-2001. His English and other western language work are collected in the 5 volume Works of Inazo Nitobe, The University of Tokyo Press, 1972. (wikipedia.org)

Five Rings: A New Translation of the Classic Te...