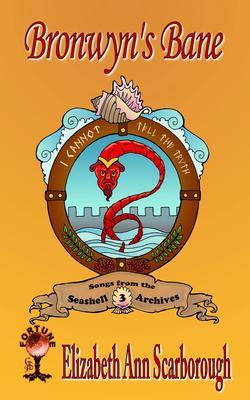 Sleeping Beauty had it easy. Her curse only made her take a nap when she turned 16. As if it wasn't bad enough already that because of her frost giant heritage from her father the king's side of the family she was 6 feet tall when she was only 12 years old, poor Princess Bronwyn (the Bold) of Argonia was cursed at birth to tell nothing but lies. With her father away at war and her mother heavily pregnant, Bronwyn is even more in the way than usual, so she gets packed off to Wormroost, her aunt's place in the glaciers, and en route she meets her musician/magician cousin Carole, a not-so-brave gypsy lad, and a princess-turned-swan. The lot of them encounter monsters, sorcerers, sea serpents, mercenary mages and sirens-many of whom are related to them. Without quite intending to, they embark on a quest to end the war, heal a battle-ravaged land, end a ban on magic and lift Bronwyn's Bane.

Elizabeth Ann Scarborough is the author of more than 25 solo fantasy and science fiction novels, including the 1989 Nebula award winning Healer's War, loosely based on her service as an Army Nurse in Vietnam during the Vietnam War. She has collaborated on 16 novels with Anne McCaffrey, six in the best selling Petaybee series and eight in the YA bestselling Acorna series, and most recently, the Tales of the Barque Cat series, Catalyst and Catacombs (from Del Rey). Recently she has converted all of her previously published solo novels to eBooks with the assistance of Gypsy Shadow Publishing, under her own Fortune imprint. Spam Vs. the Vampire was her first exclusive novel for eBook and print on demand publication, followed by Father Christmas (a Spam the Cat Christmas novella) and The Tour Bus of Doom. Redundant Dragons is her newest exclusive novel in The Seashell Archives series and follows The Dragon, the Witch, and the Railroad.