Boy is Back, The + Every Boy's Got One Bundle – Meg Cabot | buch7 – Der soziale Buchhandel
Bitte warten ... 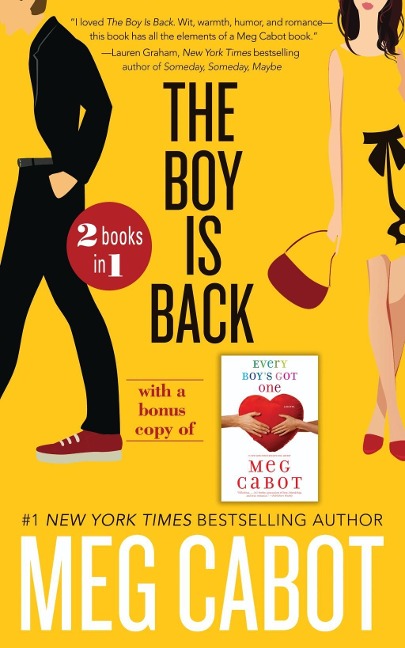 Boy is Back, The + Every Boy's Got One Bundle

THE BOY IS BACK

Reed Stewart thought he'd left all his small-town troubles—including a broken heart—behind when he ditched tiny Bloomville, Indiana, ten years ago to become rich and famous on the professional golf circuit. Then a post on the Internet causes all of those troubles to return with a vengeance. Becky Flowers has worked hard to build her successful senior-relocation business, but she's worked even harder to forget Reed Stewart. She has absolutely no intention of seeing him when he returns—until his family hires her. Now Reed and Becky can't avoid one another—or the memories of that one fateful night.

EVERY BOY'S GOT ONE

Cartoonist Jane Harris is delighted by the prospect of her first-ever trip to Italy, even though it means being a bridesmaid at her best pal Holly's elopement to longtime beau Mark...and it's hate at first sight for Jane and Mark's best man Cal Langdon. But when Holly and Mark's wedding plans hit a major snag, Jane and Cal find themselves having to put aside their mutual dislike for one another in order to get their best friends on the road to wedded bliss—and end up on a road themselves...one neither of them ever expected.

Meg Cabot's many books for both adults and tweens/teens have included multiple global and #1 New York Times bestsellers, selling over twenty-five million copies worldwide. Her Princess Diaries series has been published in more than 38 countries and was made into several hit films by Disney. Meg is still waiting for her real parents, the king and queen, to restore her to her rightful throne. She currently lives in Key West, FL, with her husband and various cats.

Creatures of a Day

People at the Well

Yellow and the Perception of Reality

The Revision Of Psychoanalysis