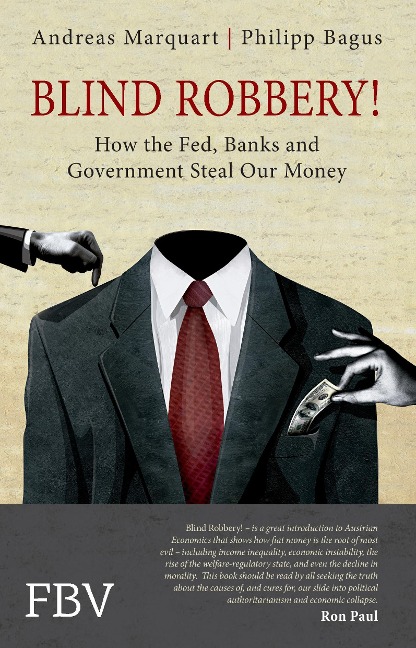 Money does not come from the state! Actually, no one believes that statement. But they should. That is because America, like every other country in the world, has a pure paper money system, in which new money is created out of thin air. Andreas Marquart and Philipp Bagus show you how money arises and why our current money is bad money. You will learn how important good money is for an economy and what influence bad money has on everyone in society.

What role does the state, government, and politics play in redistribution in favor of the super-rich? Why is a naive faith in the state anything other than a good strategy for the future for each individual citizen?

Anyone who has never really trusted politicians - even if it started out as only a gut feeling - will find confirmation in this book that this gut feeling was right all along. An easy to understand introduction to the question of why money is responsible for so many problems in our society.

"'Blind Robbery' is a great introduction to Austrian Economics that shows how fiat money is the root of most evil-including income inequality, economic instability, the rise of the welfare-regulatory state, and even the decline in morality.  This book should be read by all seeking the truth about the causes of, and cures for, our slide into political authoritarianism and economic collapse."
Ron Paul

"Andreas Marquart and Philipp Bagus have written an absorbing, compelling, and logically unassailable defense of sound money against the inflationary government alternative. The knowledge in this beautiful book is unknown to virtually everyone, and almost no one learns about it in school. But our prosperity depends on it. It's your responsibility to read it, master the message it contains, and place it in the hands of as many of your friends as you can."
Tom Woods, author of "Real Dissent: A Libertarian Sets Fire to the Index Card of Allowable Opinion"

"'Blind Robbery!' provides a superb explanation of the unholy relationship between governments and central banks in society today. It's a complicated subject, but Bagus and Marquart use commendably plain language to simplify the monetary theory behind their arguments. They not only explain the disastrous financial consequences of modern banking systems, but also the moral, cultural, and social impact of punishing thrift and rewarding consumption. In doing so, the authors carry forward the important work of Adam Fergusson (When Money Dies) and Jörg Guido Hülsmann (The Ethics of Money Production): societies marked by unchecked monetary expansion inevitably decline in character just as they decline economically. Readers especially will benefit from their explication of possible endgame scenarios for fiat currencies in Chapter 8.
'Blind Robbery!' is a readable and enjoyable book - albeit a troubling one - for anyone interested in money and banking in the modern era. Even readers already well-versed in the money theory of the Austrian school of economics will enjoy the author's fresh approach to the subject. It's a must read for anyone seeking to understand how states and their central banks undermine real prosperity."
Jeff Deist, Director of the MisesInstitute (Auburn, Alabama)

Philipp Bagus studied economics in Münster, Germany and in Madrid, Spain. He received his PhD under Prof. Jesús Huerta de Soto on the subject of deflation. He is a professor at the Universidad Rey Juan Carlos in Madrid. He teaches introduction to economics, principles of microeconomics and macroeconomics, and the methodology of the Austrian school. Dr. Bagus is the author of In "Defense of Deflation", "The Tragedy of the Euro" and "Deep Freeze, Iceland's Economic Collapse" (Co-authored).
Andreas Marquart is chairman of the Ludwig-von-Mises-Institut Deutschland (The Ludwig von Mises Institute of Germany). After leaving school, he undertook a "classical" education at a bank and after 15 years as a banker, went freelance in 1998, now working as an investment advisor in the financial industry. His financial advice is grounded in the Austrian school of economics. You can learn more about him at: http://austrianconsultant.de/.