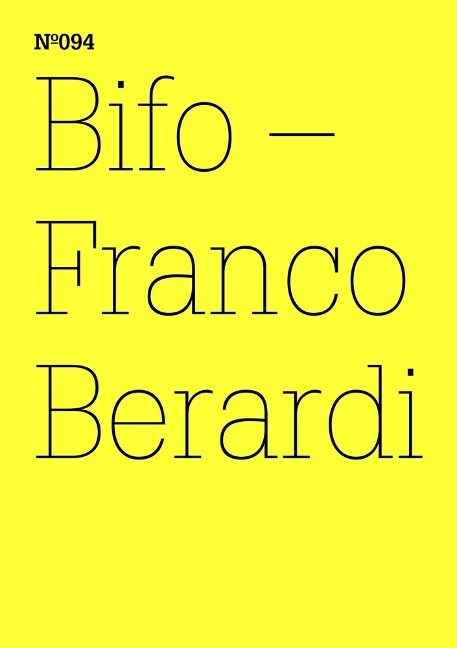 In this notebook, the media theoretician and activist Bifo - Franco Berardi reflects on some of the intentions of dOCUMENTA (13), based on his conviction that the current crisis of the economy and global society will prove a deadly development, as long as culture and lifestyle do not react to the predominant trend of "exhaustion" of physical resources, mental energies, and social organisms. Here, art is assigned a crucial role. Artists frequently recognize and articulate the exhausted state of the world in all of its tragedy: the implosion of finance-based capitalism can be counteracted with frugality instead of accumulation, and friendship instead of rivalry, to create a new Europe 2.0 involving "institutions of exchange and solidarity, instead of competition and greed." Projects and designs by artists such as Doug Ashford, Man Ray, William Kentridge, AND AND AND, or Gustav Metzger are cited, and accompany the text, as does a facsimile of a letter from the artist Kai Althoff (a dOCUMENTA (13) invitee) to Artistic Director Carolyn Christov-Bakargiev; in it, he asks to be freed "from the exhausting task of his involvement."