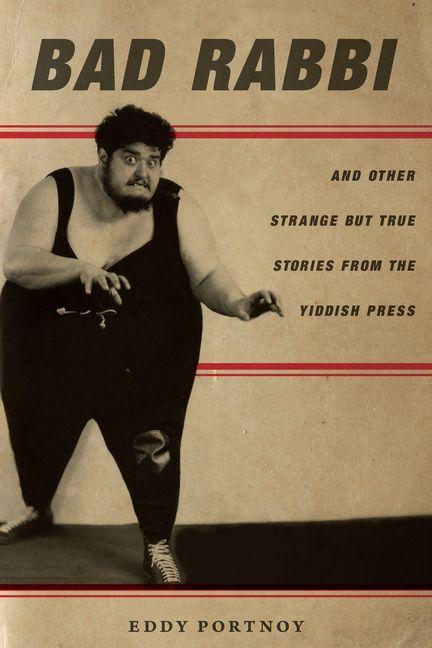 And Other Strange but True Stories from the Yiddish Press

Stories abound of immigrant Jews on the outside looking in, clambering up the ladder of social mobility, successfully assimilating and integrating into their new worlds. But this book is not about the success stories. It's a paean to the bunglers, the blockheads, and the just plain weird-Jews who were flung from small, impoverished eastern European towns into the urban shtetls of New York and Warsaw, where, as they say in Yiddish, their bread landed butter side down in the dirt. These marginal Jews may have found their way into the history books far less frequently than their more socially upstanding neighbors, but there's one place you can find them in force: in the Yiddish newspapers that had their heyday from the 1880s to the 1930s. Disaster, misery, and misfortune: you will find no better chronicle of the daily ignominies of urban Jewish life than in the pages of the Yiddish press.

An underground history of downwardly mobile Jews, Bad Rabbi exposes the seamy underbelly of pre-WWII New York and Warsaw, the two major centers of Yiddish culture in the late nineteenth and early twentieth centuries. With true stories plucked from the pages of the Yiddish papers, Eddy Portnoy introduces us to the drunks, thieves, murderers, wrestlers, poets, and beauty queens whose misadventures were immortalized in print. There's the Polish rabbi blackmailed by an American widow, mass brawls at weddings and funerals, a psychic who specialized in locating missing husbands, and violent gangs of Jewish mothers on the prowl-in short, not quite the Jews you'd expect. One part Isaac Bashevis Singer, one part Jerry Springer, this irreverent, unvarnished, and frequently hilarious compendium of stories provides a window into an unknown Yiddish world that was.

Eddy Portnoy is Senior Researcher and Director of Exhibitions at the YIVO Institute for Jewish Research.

Contents and Abstracts
Introduction: A Brief and Not Entirely Uncomplicated History of the Yiddish Press
chapter abstract

This section provides a brief history of the modern Yiddish press of New York and Warsaw. It discusses the cultural, political and social contexts in which it appeared and why its development was a necessary and important phenomenon in Jewish life. Additionally, the chapter describes why and how the Yiddish press became a vehicle for drastic upheaval in Jewish life. Also discussed are the beginnings and nature of Yiddish journalism as a distinctly ethnic literary form and how a variety of journalistic occupations developed. The nature of its audience and elements of its subject matter is considered, as are the reasons for the importance of said subject matter for Jewish historiography in general. The introduction gives the reader an understanding of modern Yiddish culture while setting the stage for the subsequent chapters, which provide primary source data from the Yiddish press.

This chapter considers the story of Jacob Rosenzweig, a Jewish immigrant abortionist active in New York City during the late 1860s and early 1870s. In 1871, a patient died in his care. Rosenzweig stuffed her body in a trunk and attempted to ship it to Chicago, but the decaying body was discovered in a baggage depot and police were alerted. New York City Police investigating the case were eventually led to Rosenzweig, who was caught, placed on trial, and convicted.

This chapter details the story of Pesach Rubenstein, an eastern European Jewish immigrant in New York City who murdered his cousin/lover whom he had accidentally impregnated. Rubenstein's 1876 court case, reports of which appeared in nearly every newspaper in the United States, was the most significant interface between American media and Jews in the history of the country.

This chapter presents a brief biography of Naphtali Herz Imber, a poet best known for writing "Hatikva," which became the Israeli national anthem. While Imber has been the subject of biographical studies, what official narratives ignore is Imber's work as a performance psychic during the late 19th century and a mercurial alcoholic during the early 20th.

This chapter details an event that took place on New York City's Lower East Side in which rumors that children were having their throats slashed in public schools spread throughout immigrant Jewish neighborhoods. Upon hearing these rumors, tens of thousands of Jewish mothers rioted, besieging the area's public schools and demanding to see if their children were alive.

This chapter provides a biographical sketch of Professor Abraham Hochman, one of the Lower East Side's best known psychics. Famed, among other things, for finding husbands who had abandoned their wives, Hochman engaged in all manner of dubious stunts in order to generate publicity for his business.

This chapter details the history of anti-religious behavior on the solemn holiday of Yom Kippur and the reaction those activities engendered. Typically anarchist or socialist-oriented Jews would engage in acts of public eating on Yom Kippur, a holiday that requires a 25 hour fast. Such activity would enrage religious Jews and pitched battles would typically ensue.

This chapter tells the story of Hillel Tseytlen, a famed journalist who broke away from a leading Yiddish paper in Warsaw to join a competing newspaper. Doing so provoked the ire of Tseytlen's original editor, who initiated an ugly smear campaign against him. Tseytlen and his new editors fought back and a war of words broke out between two daily papers with a third and fourth chiming in.

This chapter considers the phenomenon of suicide among Jews in Warsaw. During the interwar period, suicides were so common that reports of them appear nearly every day in the Warsaw Yiddish press. While doubtlessly a tragic and unpleasant issue, many of the suicide stories reported in the dailies contain odd and humorous twists. Such reportage revealed the delicate and difficult line Warsaw's Jews walked as an impoverished minority.

9Battle at the Bris
chapter abstract

This chapter details the story of a Warsaw-based Hasidic Rabbi who attempted to reconcile with another Hasidic Rabbi who had been his blood enemy by giving him a special duty at his son's circumcision ceremony. The problem was that the first rabbi's followers refused to accept the reconciliation. The ceremony, a joyous but also solemn affair, was rocked when a brawl exploded among the guests, nearly all Hasidim.

This chapter tells the story of Urke Nachlnik, a yeshiva student who fell in with a bad crowd and who wound up becoming a professional criminal. After writing a prison memoir that became the best selling book in Poland in 1933, Nachalnik turned to literature and playwriting as a profession, churning out intense stories of the Yiddish criminal underworld that riveting readers throughout the country. Also included is a sample story that appeared in 1938, "Passover in the Joint."

This chapter offers the story of Gimel Kuper, a journalist for the Forverts, the largest Yiddish newspaper in the world, who wrote popular human interest stories that were typically based in Poland. It turns out that Gimel Kuper was the pseudonym of the famous Yiddish writer Israel Joshua Singer, whose brilliant reportage revealed many hidden corners of Jewish life. Includes a sample story from 1927 about Jewish beggars and drunks in Warsaw.

This chapter details the story of the Miss Judea Pageant, a contest to crown the most beautiful Jewish girl in Poland in 1929. After the pageant was complete, the winner, one Ms. Zofia Oldak, was carted around Warsaw for photo-ops with important Jewish celebrities, politicians, and cultural figures. One of these events was a banquet at the Jewish Community Council, where its president lauded her beauty and sang to her. Upset at his antics, ultra-orthodox members of the community protested. In the end, the pageant became the impetus behind a massive riot in Warsaw's biggest Jewish cemetery.

This chapter tells the story of a failed relationship that results in one of the partners biting off the penis of the other.

This chapter describes the public divorce court that existed as part of the Warsaw Rabbinate. Newspaper editors frequently sent writers to observe divorce cases because of the prevalence of violence. A popular feature in Yiddish papers, divorce reportage provide a lurid look into private affairs. Numerous examples are provided.

This chapter details the phenomenon of "Shabbos Enforcers," religious Jews who take it upon themselves to ensure that all Jews observe the laws of the day of rest. Because their activity involves insinuating themselves into people's personal business, their entreaties were often rebuffed. Violence often broke out between those who were trying to ensure that the laws of Shabbos were not being broken and those who either didn't know or didn't care that they were breaking such laws.

This chapter tells the story of Blimp Levy, a 625 pound Jewish professional wrestler. Although a morbidly obese novelty, Levy was a popular and successful wrestler from the late 1930s to the early 1950s. An unknown figure among Jewish sports heroes, he deserves his place in the pantheon.

This chapter tells the story of a bigamist Hasidic Rabbi and his antagonist second wife, Zlate Rubin. After marrying her in a fraudulent ceremony in New York for a large sum of cash, the Rabbi returned to Poland. Zlate, however, subsequently demanded that he divorce his first wife and marry her in a traditional Jewish ceremony or he had to return the money. Zlate showed up in Poland demanding her money. He returned what he still had, but it wasn't enough. She told him if he didn't give her the money, she would tell everyone he was a bigamist. He had her arrested for blackmail. She had him charged with bigamy. Even if it was a huge communal embarrassment, her 1927 trial riveted the Jews of Poland.

Beginning with a brief description of the nature of Warsaw's Yiddish crime blotter, the section of Yiddish papers that focused on crime and deviance, this chapter provides dozens of examples of articles that delve into the Jewish underworld, as well as into the realm of poverty and insanity. These small articles function as explosive examples of a troubled and downwardly mobile Jewry, one that will be totally unfamiliar and surprising to readers - even those who have some familiarity with pre-WWII Warsaw.

A Pale View of Hills

Summary of The End of Alzheimer's: The First Pr...

Essays and Treatises on Moral, Political and va...