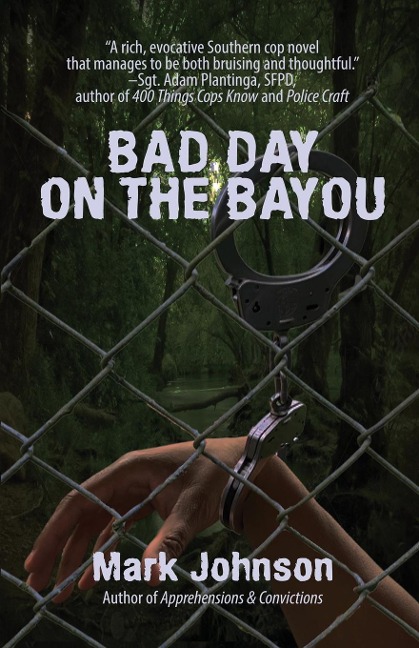 Bad Day on the Bayou

The body of teenager Antwan Driggers is found handcuffed to a fence in a swampy area south of Mobile, Alabama. His throat has been slit. The cuffs preventing Antwan's escape belong to veteran detective Russ Hampton, who is found just yards away unconscious and bleeding from multiple gunshot wounds. When he awakens 36 hours later in a hospital bed, Hampton is rebuked by his ex-wife, informed of his prisoner's gruesome fate, and set upon by colleagues from homicide and internal affairs who demand explanations and answers that Hampton doesn't have. A former clergyman, Hampton believes all that's required of him is to "do justice, love mercy, and walk humbly..." But as a cop in trouble, this appears increasingly insufficient.

Meantime, news media trumpet "Black Youth Slain in Police Custody." Roiling speeches are delivered to restive crowds by itinerant justice warriors. Property is damaged, people are injured. The Department publicly puts Hampton on medical leave, but he's informed that it's administrative leave as well. Prioritizing damage control, PD command staff view Hampton as a liability. Unreported is the little-known fact that Hampton and Driggers were friends. Hampton knows the family; he'd promised Antwan's mother he'd do all could to keep her son out of trouble. Vowing to find Antwan's killer-with or without the department's cooperation-Detective Russell Hampton embarks on a rogue investigation which triggers a rolling gunfight and two abductions, introduces him to political intrigue and an exotic dancer named Felanie, and leads him on an international manhunt.

Praise for Bad Day on the Bayou:

"Johnson knows the turf and it shows. Bad Day on the Bayou is a rich, evocative Southern cop novel that manages to be both bruising and thoughtful with characters who are just the right kind of flawed." -Sgt. Adam Plantinga, San Francisco Police Department, and author of 400 Things Cops Know, Police Craft, and the forthcoming novel Nothing Like Easy

"Reminiscent of Joseph Wambaugh's police novels, Johnson's Bad Day on the Bayou catches the essence of a complex murder investigation amid the conflicting political agendas of community leaders and local government. It will keep you turning the pages!" -Doug Lamplugh, 30-year law enforcement officer (local, state, and federal) and author of Murder at Mardi Gras

"Mark Johnson's Bad Day on the Bayou is the gripping tale of former clergyman turned cop Russ Hampton who, while in the line-of-duty, finds himself in a heap of trouble after a suspect in his custody is mysteriously murdered. Johnson is a master story-teller and as an ex-cop he knows the ins and outs of police work and uses his former life to give the reader special insight into what makes cops tick. Skillfully weaving in today's news in a red-hot climate of mistrust and anger, Johnson has created a memorable character, in the tradition of Joseph Wambaugh and Michael Connelly." -Charles Salzberg, two-time Shamus Award nominee for Swann's Last Song and Second Story Man

"Bad Day on the Bayou is one of those wonderful reads that can only come from a writer who has experienced the life. It is a book loaded with suspense, authenticity, and wonderful character development. Highly recommended." -David Swinson, author of A Detailed Man and The Second Girl