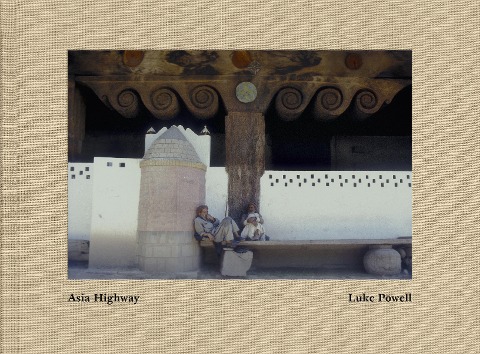 Asia Highway is Luke Powell's photographic examination of Iran and particularly Pakistan, acknowledging the destruction these cultures have undergone while emphasizing the beautiful and good that Powell discovered on his travels. The photos in the first chapter were taken in Iran in 1974 and include the historical bazaar of Tabriz (a crucial center on the Silk Road and since 2010 a UNESCO World Heritage Site), while the succeeding chapters depict northern Pakistan. The story of the book's origins orbits around various political events: Powell photographed a series on Pakistan's Swat district after he had left Afghanistan just ahead of the Taraki coup in 1978; and in 2000 the Taliban invited him to return while restricting his subsequent movements, prompting Powell to travel to Pakistan and work in Chitral and Gilgit. Other chapters explore Peshawar and the Kalash people in Chitral.

Born in 1946, Luke Powell holds degrees in religion from the University of North Carolina and Yale University. He first visited Iran and Pakistan in the autumn of 1971. During the Russian occupation of Afghanistan his exhibition "The Afghan Folio" traveled to 120 museums and galleries, yet requests for further exhibitions ceased when US intervention began. From 2000 to 2003 Powell photographed for the United Nations Mine Action Centre for Afghanistan and other UN agencies. Steidl published Powell's Afghan Gold in 2013.