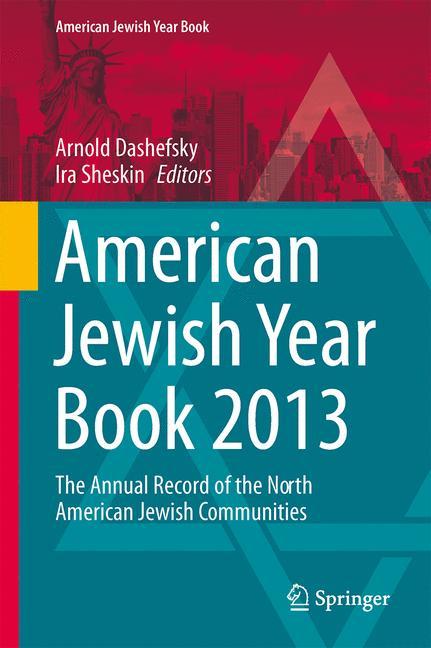 The Annual Record of the North American Jewish Communities

This book, in its 113th year, provides insight into major trends in the North American Jewish community, examining Jewish education, New York Jewry, national and Jewish communal affairs, and the US and world Jewish population. It also acts as an important resource with its lists of Jewish Institutions, Jewish periodicals, and academic resources as well as Jewish honorees, obituaries, and major recent events. It should prove useful to social scientists and historians of the American Jewish community, Jewish communal workers, and the press, among others.
For more than a century, the American Jewish Year Book has remained and continues to serve, even in the Internet age, as the leading reference work on contemporary Jewish life. This year's volume, with its special reports on Jewish education and  the New York community and its updates on Jewish population statistics, Jewish institutions, and the major Jewish figures who passed in the year past, continues this splendid tradition.
Pamela S. Nadell, Chair, Department of History, American University and Co-editor, Making Women's Histories: Beyond National Perspectives
The 2013 volume of the American Jewish Year Book impressively demonstrates that Arnold Dashefsky and Ira Sheskin have restored this important resource in all its former glory.
Bruce A. Phillips, Professor of Sociology and Jewish Communal Service, Hebrew Union College-Jewish Institute of Religion, Los Angeles

Having a current American Jewish Year Book on my shelf is like having a panel of experts on American Jewish life at the ready, prepared to give me thoughtful, accurate answers and observations on the key issues, trends and statistics that define our continental Jewish community today. Well into its second century, the American Jewish Year Book continues to be an essential resource for serious leaders, practitioners and students who seek to ground their work in solid research and up-to-date data.
Jacob Solomon, Greater Miami Jewish Federation President and CEO

He recently completed editing (with I. Sheskin) Volume 109-112 of the American Jewish Year Book 2012 (Springer), which continues a publication of 108 volumes previously issued from 1899-2008; and co-authored Charitable Choices with B. Lazerwitz (Lexington Books), which focuses on the motivations for charitable giving. Other recent publications include Intermarriage and Jewish Journeys in the United States (coauthored with Z. Heller) and "Jewish Population in the United States, 2011" (with I. Sheskin), published in a new on-line series Current Jewish Population Reports, which he initiated and edited (with I. Sheskin) for the Berman Institute - North American Jewish Data Bank.  In addition to publishing many articles, he is the co-author or editor of several other books: Ethnic Identification Among American Jews (2nd edition published by UPA, 1993) is a book which focuses on Jewish continuity by examining the transmission of Jewish identity for two generations (originally published by Lexington Books, 1974, co-authored with H.M. Shapiro). Americans Abroad (co-authored with J. DeAmicis, B. Lazerwitz and E. Tabory) compares emigrants to Australia and Israel (originally published by Plenum Press, 1992, with a revised second edition and new introduction with Karen Woodrow-Lafield to be published by Springer). He also co-authored with B. Lazerwitz, J.A. Winter and E. Tabory Jewish Choices: American Jewish Denominationalism (published by SUNY Press, 1998). In addition, he is also the editor of several volumes: Ethnic Identity in Society (edited for Rand-McNally, 1976) and Contemporary Jewry, Volumes 7 and 8 (edited for the Association for the Social Scientific Study of Jewry and published by Transaction Books, 1986 and 1987).

Dr. Dashefsky has served as a consultant to the American Jewish Committee, Commission on Jewish Education of the Jewish Federation of Greater Hartford, Jewish Education Association of MetroWest, NJ, Rhode Island Department of Vocational Education Sex Equity Project, and United Jewish Appeal. He has been honored by being named a distinguished alumnus of Gratz College (Philadelphia) at its Centennial Convocation and elected to the Connecticut Academy of Arts and Sciences (New Haven) just prior to its Bicentennial. Professor Dashefsky is one of the founders of the Association for the Social Scientific Study of Jewry (ASSJ), an international organization, and served as president as well as past editor of its journal, Contemporary Jewry. In 2012, he received the Berman Award for Service from ASSJ. He also completed two terms as Secretary-Treasurer and board member of the Association for Jewish Studies, an international organization. In addition, he was a Visiting Scholar at Stanford University, George Washington University, and Florida Atlantic University. A former Associate Head of the Sociology Department, he served as the founding Director of the Center for Judaic Studies and Contemporary Jewish Life, located in the Thomas J. Dodd Research Center at the University of Connecticut, and currently is the Director of the Mandell L. Berman Institute - North American Jewish Data Bank, also housed at UConn (http://www.jewishdatabank.org). Finally, he serves as editor (with I. Sheskin) of the new series of the American Jewish Year Book.

Dr. Ira M. Sheskin, is the Director of the Jewish Demography Project of the Sue and Leonard Miller Center for Contemporary Judaic Studies at the University of Miami and, a Professor of Geography at the same institution.

He has also been a consultant to numerous synagogues, Jewish day schools, Jewish agencies and Jewish Community Centers throughout the country. In total, he has completed over 110 studies for over 80 synagogues, Jewish organizations and commercial entities.

Dr. Sheskin was a member of the National Technical Advisory Committee of the Jewish Federations of North America from 1988 to 2003. This committee completed both the 1990 and 2000-01 National Jewish Population Surveys. He also serves on the board of the North American Jewish Data Bank.

His publications include books entitled Survey Research for Geographers, How Jewish Communities Differ, and Comparisons of Jewish Communities: A Compendium of Tables and Bar Charts. He is the Editor of the American Jewish Year Book and is the author of numerous articles on Jewish demography, including the annual article on Jewish demography which appears in the American Jewish Year Book. http://www.jewishdatabank.org.