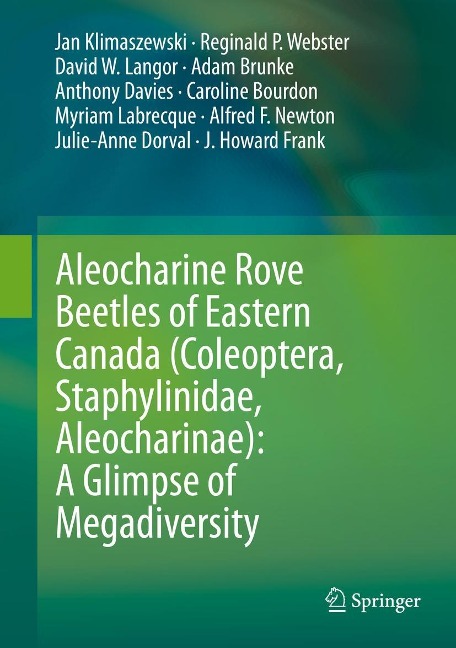 A first comprehensive synopsis of all aleocharine rove beetle species (Coleoptera, Staphylinidae) recorded from eastern Canada, from Ontario to the Maritime Provinces inclusively, is presented. Four hundred and seven species in 96 genera, and 16 tribes are presented and discussed.Tribes and subtribes are arranged in presumably phylogenetic order as it is currently recognized. Genera and subgenera are listed alphabetically. Species are listed alphabetically or in species groups to better reflect their relationships. Species distribution is listed by abbreviated provinces and territories in Canada and abbreviated states in the United States. Geographic status is given to every species as Native, Holarctic or adventive with some species listed with undetermined status - adventive or Holarctic. Every treated species is presented with a diagnosis, including short description of body and description of the median lobe of aedeagus, spermatheca, and tergite and sternite VIII of both sexes. For each species a plate with colour habitus image and black and white images of genital structures is provided to aid with positive identification. Collection and habitat data (often new) are presented for each species, including data on macrohabitat, microhabitat, collecting period, and collecting methods.

Reginald Webster is a self-employed entomologist and a Research Associate with the New Brunswick Museum. He obtained a Ph.D. from Michigan State University and has held postdoctoral positions at Duke University in North Carolina, University of Massachusetts, and Laval University in Quebec. His research focused on sexual behavior in moths. Since then he has devoted most of his research scope to the taxonomy, conservation status and faunistics of beetles, especially from old-growth forests and other poorly sampled ecosystems, in part, through contract work with the Canadian Forest Service. He has published over 90 peer-reviewed publications based on this research and has co-authored the descriptions of over 50 species of Coleoptera, mostly in the staphylinid subfamily Aleocharinae.
David Langor is a senior scientist with Natural Resources Canada. Most of his research focuses on forest biodiversity conservation, systematics of weevils, and invasive alien species. He has published over 190 scientific works, including eight books. His current research focuses on ecosystem based forest management and systematics of the weevil genus Pissodes, and he is leading a national assessment of biodiversity in Canada.
Adam Brunke is a research scientist at the Canadian National Collection, Agriculture and Agri-Food Canada. He has conducted research at the University of Guelph (Canada), University of Copenhagen (Denmark) and the Natural History Museum of Vienna (Austria). His research focuses on the phylogeny, taxonomy, classification and biogeography of rove beetles (Staphylinidae) using both morphological and molecular evidence. Fieldwork has taken him to Costa Rica, Myanmar, Vietnam, Bolivia and the southern and western United States. He has published over 20 articles on rove beetles, described over 50 new species and published a higher level reclassification of subfamily Staphylininae.
Anthony Davies has been providing research, curatorial and technical support for coleopterists at the Canadian National Collection since 1971, including J.M. Campbell, A. Smetana and P. Bouchard, while identifying several families of beetles for the National Identification Service, specializing in the Staphylinoidea. He was a contributing author in both editions of the "Checklist of Beetles of Canada and Alaska", the "Reclassification of the North Temperate Taxa Associated with Staphylinus Sensu Lato" (with A. Smetana), the "Catalogue of Palaearctic Coleoptera", "Family Group Names in Coleoptera" and two volumes of "Adventive Species of Coleoptera Recorded from Canada", as well as smaller revisionary studies. He is also frequently called upon to review publications dealing with Coleoptera.
Caroline Bourdon is a forestry technician who graduated from CEGEP de Ste-Foy, Quebec. She works as a research technician at the Laurentian Forestry Centre, Natural Resources Canada, where she is involved in many projects in forest entomology and pathology. She participated in research leading to 21 publications for this Center.
Myriam Labrecque holds a B.Sc. in biology and a M.Sc. in forest science with a specialization in entomology from Laval University. She worked as a research assistant with Jan Klimaszewski for a few years at the Laurentian Forestry Center (Quebec). Her interest are in biodiversity, invasive species and ecology. She is now working as a research project manager with Managium (Quebec).
Howard Frank is an emeritus professor of entomology at the University of Florida. Trained as an insect ecologist at Oxford University, he accepted first a postdoctoral position at the University of Alberta, where he encountered several dedicated taxonomists and learned some taxonomy by association with them. His employment was all 'applied' insect ecology including biological control, but often he took time to study Staphylinidae that he encountered, or that friends had asked him identify. His staphylinid publications number about 60 and are greatly outnumbered by those in applied entomology.
Julie-Anne Dorval holds a B.Sc. in marine biology and a M.Sc. in Oceanography with a specialization in benthic ecology from University of Quebec in Rimouski - ISMER. She is a research assistant with Jan Klimaszewski at the Laurentian Forestry Center (Quebec). Through the years she specialized in photo and video treatment and analysis, digitalization and maintenance of collections, and identification of marine invertebrates.
Alfred F. Newton is a research scientist affiliated with Field Museum since 1985 as Assistant Curator (to 1991), Associate Curator (to 2008), and now Curator Emeritus in the Zoology Department's Division of Insects. His research is primarily on the taxonomy, classification, phylogeny and evolution of Staphyliniformia, or rove beetles and allies, a group which is larger than Vertebrata and includes more than 78,600 named species worldwide. He has conducted more than three years of field work worldwide, mainly in the United States, Mexico, Chile, Australia and New Zealand, and has produced more than 100 peer-reviewed research publications as well as many scientific notes and reports, and contributed to building several web resources.