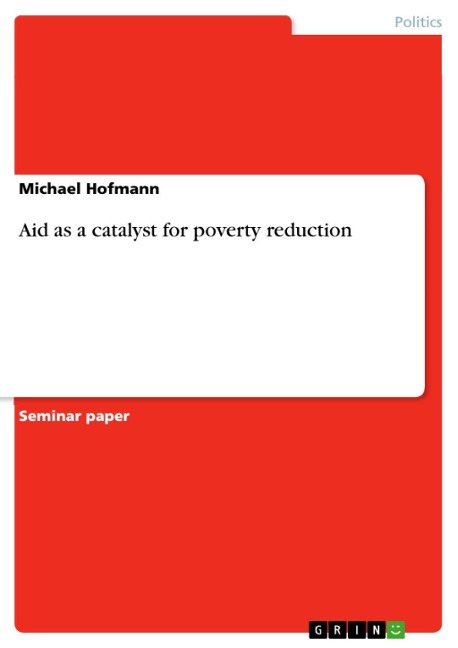 Aid as a catalyst for poverty reduction

The underdevelopment of the African continent and the multi-layered causes of this problem have been central to various plans and frameworks aimed at finding a way out of the vicious circle of poverty, poor governance, indebtedness and lack of resources. From efforts in the 1980s to more recent initiatives1, the African countries were mostly perceived as the problem children of international development policies. Besides these specifically Africa orientated development frameworks, a number of global programmes were launched in order to approach the problems faced by Least Developed (LDC) and often Heavily Indebted Poor Countries (HIPC). Examples are the HIPC Initiative (1996) supported by the IMF and World Bank, and the formulation of the Millennium Development Goals (MDGs) in September 2000.

By releasing its report2 in March 2005, the Commission for Africa, set up by Britain's Prime Minister Tony Blair, added another plan to the already exiting ones. The appointment of the commission was due to the fact that the Millennium Development Goals that have to be reached until 2015 are likely to be missed. Assuming the presidency of both, the EU and the G8 summit in 2005, the British government saw itself in a good position to advance decisively international development policies towards Africa. Cornerstones of the report are 100 per cent debt cancellation for sub-Saharan African countries "which need it",3 additional $25 billion a year in aid provided by donor countries by 2010 and a further increase of $25 billion a year by 2015.4

These are only some of the objectives outlined by the commission's report but they constitute the main pillars concerning the immediate economic intents. One has to point out that the main prerequisites for an effective implementation of the plan's proposals are adjustment processes related to African institutions. Institutional deficiencies on the recipients' side are a problem that has to be considered as being crucial. The lack of home-grown institutional competence5 and basic institutions of accountability6 respectively are some aspects that point to the shortcomings of recipient's capacity to manage an increase in money inflow wisely. [...]