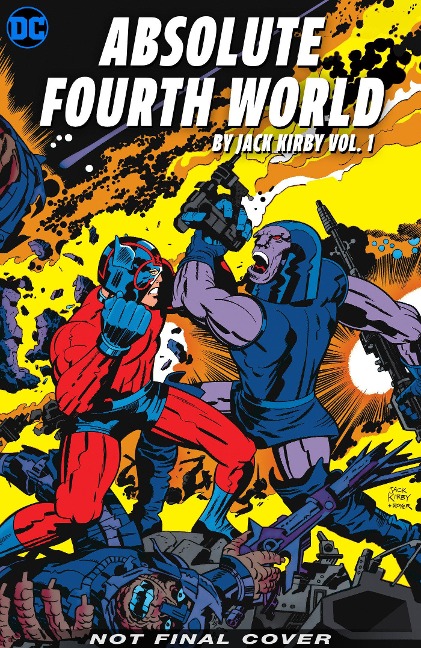 For the first time ever, DC collects the "Fourth World" works of legendary writer/artist Jack Kirby in a premium Absolute hardcover edition.

After co-creating comic book heroes such as The Fantastic Four and The Hulk, legendary writer/artist Jack Kirby came to DC Comics in 1970 to write and illustrate four interlocking series known collectively as "The Fourth World."
Now, as part of the celebration of the 100th birthday of Jack Kirby, DC collects Kirby's entire runs on these four series--The New Gods, The Forever People, Mister Miracle and Superman's Pal Jimmy Olsen--In a single volume. These comics spanned galaxies, from the streets of Metropolis to the far-flung twin worlds of New Genesis and Apokolips, as cosmic-powered heroes and villains struggle for supremacy, and the world-conquering Darkseid adventured across Earth for the deadly Anti-Life Equation.

Jack "King" Kirby's comics career began in 1937 and continued for nearly six decades.  With partner Joe Simon, Kirby first made his mark in comics in the 1940s by drawing and/or creating numerous features for DC Comics including Sandman, The Newsboy Legion and Manhunter, and for Marvel including Captain America, The Young Allies and the Kid Commandos. As the most valued team in comics, Simon and Kirby went on to create titles and concepts including Fighting American, Boy's Ranch and the creation of the romance comics genre.  In 1961, the first issue of Marvel's Fantastic Four cemented Kirby's reputation as comics' preeminent creator, and a slew of famous titles followed that elevated him to legendary status, including The Incredible Hulk, Avengers and X-Men.  Kirby returned to DC in 1971 with his classic Fourth World Trilogy, which was followed by The Demon and Kamandi.  Kirby continued working and innovating in comics until his death in 1994.