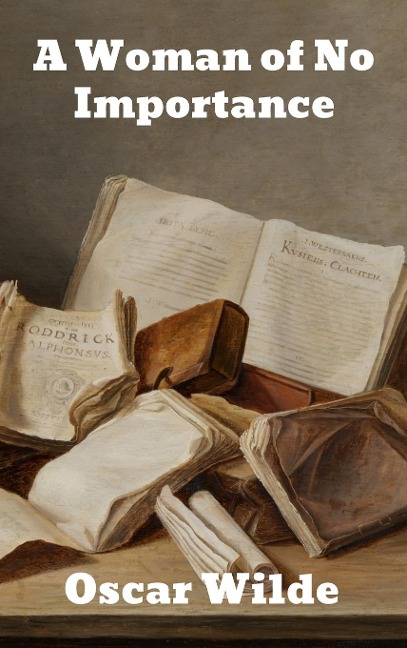 A Woman of No Importance

A Woman of No Importance is a play by Irish playwright Oscar Wilde. The play premièred on 19 April 1893 at London's Haymarket Theatre. Like Wilde's other society plays, it satirizes English upper-class society. It has been performed on stages in Europe and North America since his death in 1900.

The play opens with a party on a terrace in Lady Hunstanton's estate. The upper class guests spend the better part of Act I exchanging social gossip and small talk. Lady Caroline Pontrefact patronizes an American visitor, Hester Worsley, and proceeds to give her own opinion of everyone in the room (and her surrounding life). Lady Caroline also denounces Hester's enthusiasm for Gerald Arbuthnot until Gerald himself enters to proclaim that Lord Illingworth, a powerful, flirtatious male political figure, intends to take him under his wing as secretary. This is great news for Gerald, as being Lord Illingworth's secretary would be the young man's first step to a life of financial/political success. The guests then discuss the rumors surrounding Lord Illingworth's aim for being a foreign ambassador, while Lady Hunstanton sends a letter through her footman to Gerald's mother, inviting her to the party.

Gerald offers to take Hester for a walk, leaving the remaining guests to gossip further about their social lives. Lady Hunstanton and Lady Stutfield comment on the yet unseen Lord Illingworth's amoral qualities towards women when the man himself enters the terrace. He declines their thanks for his hiring of Gerald Arbuthnot and says that he hired him out of personal interest. Lord Illingworth remains near Mrs. Allonby during the entire exchange until the two of them leave for the conservatory together, following a discussion of Hester's background and wealthy father. A footman enters with a letter from Mrs. Arbuthnot, stating that she will arrive to the party after dinner. When Illingworth and Mrs. Allonby return, the remaining guests have already moved to have tea in another room. The two characters have a witty conversation involving marriage and women and men until Gerald and Hester enter the room. They have some short small talk, and Lord Illingworth and Mrs. Allonby are again left alone. Their aim of discussion turns toward Hester when Mrs. Allonby reprehends the young American for her casual talk of being eighteen and a Puritan. Lord Illingworth expresses that he rather admires Hester's beauty and actually uses the conversation to assert his flirtations toward Mrs. Allonby, claiming that he has never met a woman so puritanical as Hester that she would steadfastly resist all and any advances. Mrs. Allonby asserts that Hester is sincere in her desire to be left alone, but Illingworth interprets her remarks as a playful challenge. Lord Illingworth notices Mrs. Arbuthnot's letter lying on a table and remarks that the handwriting on the envelope seems familiar. When Mrs. Allonby asks who the handwriting reminds him of, he carelessly mentions "a woman of no importance."