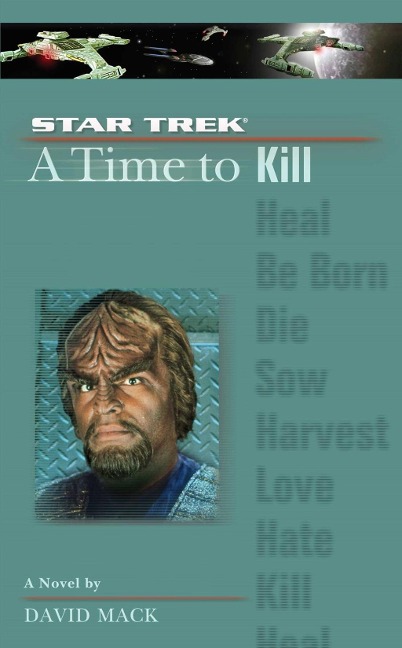 A Star Trek: The Next Generation: Time #7: A Time to Kill

On the cusp of their epic battle with Shinzon, many of Captain Jean-Luc Picard's long time crew were heading for new assignments and new challenges. Among the changes were William Riker's promotion to captain and his new command, Riker's marriage to Counselor Deanna Troi, and Dr. Beverly Crusher's new career at Starfleet Medical. But the story of what set them on a path away from the Starship Enterprise(TM) has never been told.

At the height of the Dominion War and unknown to all save those in the highest levels of command, the Federation secretly armed the neutral planet Tezwa with devastating weapons -- part of a contingency plan against the Dominion if the front lines collapsed. But Tezwa also lies near the border of the Klingon Empire...making the Federation's covert strategy in direct violation of their fragile peace treaties,and creating the potential threat of scandal and all-out war.

Now Tezwa's power-hungry prime minister is all too eager to flex his newfound military muscle, menacing a nearby Klingon border world. Sent on an urgent diplomatic mission, Captain Picard and the Enterprise crew are caught in the crossfire as the crisis quickly escalates. With time running out and billions of lives at stake, only one man can avert the looming disaster -- Ambassador Worf, who must choose between his oath to the Federation and his loyalty to Martok, Chancellor of the Klingon Empire....

Will I Ever Be Good Enough?