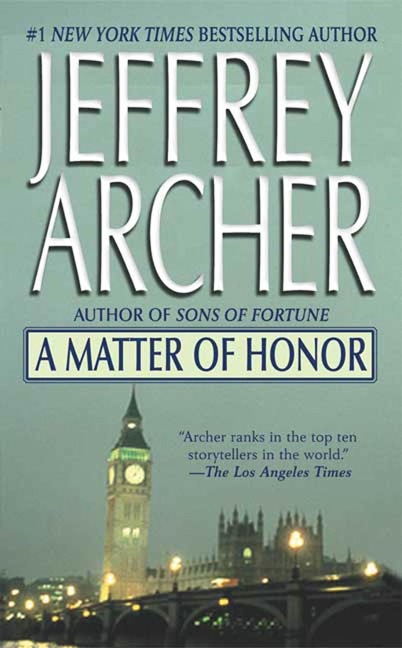 A Matter of Honor

It seems innocent enough. A disgraced British colonel bequeaths a mysterious letter to his only son. But the moment Adam Scott opens the yellowing envelope, he sets into motion a deadly chain of events that threatens to shake the very foundations of the free world.

Within days, Adam's lover is brutally murdered and he's running for his life through the great cities of Europe, pursued not only by the KGB, but by the CIA and his own countrymen as well. Their common intent is to kill him before the truth comes out. While powerful men in smoke-filled rooms plot ever more ingenious means of destroying him, Adam finds himself betrayed and abandoned even by those he holds most dear.

When at last he comes to understand what he is in possession of, he's even more determined to protect it, for it's more than a matter of life and death-it's a matter of honor.

SINS OF THE FATHER: On the heels of the international bestseller Only Time Will Tell, Jeffrey Archer picks up the sweeping story of the Clifton Chronicles....

Only days before Britain declares war on Germany, Harry Clifton, hoping to escape the consequences of long-buried family secrets, and forced to accept that his desire to marry Emma Barrington will never be fulfilled, has joined the Merchant Navy. But his ship is sunk in the Atlantic by a German U-boat, drowning almost the entire crew. An American cruise liner, the SS Kansas Star, rescues a handful of sailors, among them Harry and the third officer, an American named Tom Bradshaw. When Bradshaw dies in the night, Harry seizes on the chance to escape his tangled past and assumes his identity.

On landing in America, however, Bradshaw quickly learns the mistake he has made, when he discovers what is awaiting him in New York. Without any way of proving his true identity, Harry Clifton is now chained to a past that could be far worse than the one he had hoped to escape.