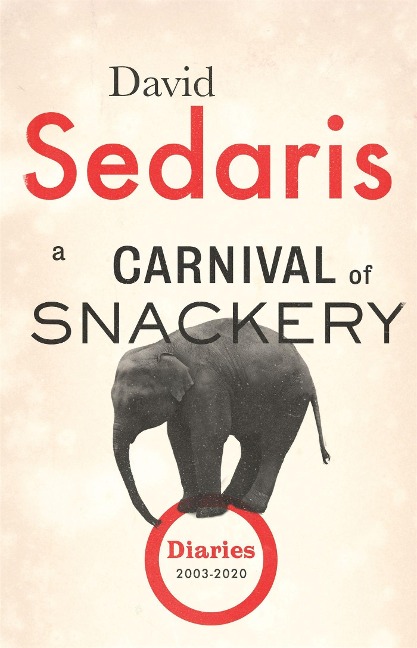 A Carnival of Snackery

There's no right way to keep a diary, but if there's an entertaining way, David Sedaris seems to have mastered it. If it's navel-gazing you're after, you've come to the wrong place; ditto treacly self-examination. Rather, his observations turn outward: a fight between two men on a bus, a fight between two men on the street, pedestrians being whacked over the head or gathering to watch as a man considers jumping to his death. There's a dirty joke shared at a book signing, then a dirtier one told at a dinner party-lots of jokes here. Plenty of laughs.
These diaries remind you that you once really hated George W. Bush, and that not too long ago, Donald Trump was a harmless laughingstock, at least on French TV. Time marches on, and Sedaris, at his desk or on planes, in fine hotel dining rooms and odd Japanese inns, records it. The entries here reflect an ever-changing background-new administrations, new restrictions on speech and conduct. What you can say at the start of the book, you can't by the end. At its best, A Carnival of Snackery is a sort of sampler: the bitter and the sweet. Some entries are just what you wanted. Others you might want to spit discreetly into a napkin.

With sardonic wit and incisive social critiques, David Sedaris has become one of America's pre-eminent humor writers. The great skill with which he slices through cultural euphemisms and political correctness proves that Sedaris is a master of satire and one of the most observant writers addressing the human condition today.

David Sedaris is the author of Barrel Fever and Holidays on Ice, as well as collections of personal essays, Naked, Me Talk Pretty One Day, Dress Your Family in Corduroy and Denim, When You Are Engulfed in Flames and his most recent book, Let's Explore Diabetes with Owls, each of which became an immediate bestseller. The audio version of Let's Explore Diabetes With Owls was a Grammy nominee for Best Spoken Word Album. He is the author of the New York Times-bestselling collection of fables entitled Squirrel Seeks Chipmunk: A Wicked Bestiary (with illustrations by Ian Falconer). He was also the editor of Children Playing Before a Statue of Hercules: An Anthology of Outstanding Stories. Sedaris's pieces appear regularly in the New Yorker and have twice been included in 'The Best American Essays'. There are a total of ten million copies of his books in print and they have been translated into twenty-nine languages.