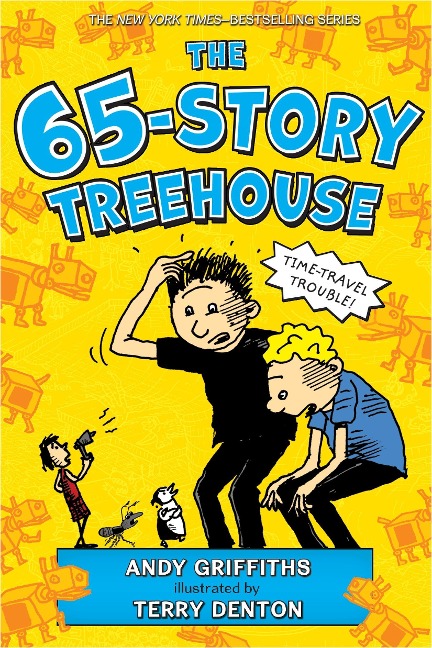 New York Times bestselling author Andy Griffiths invites readers to come hang out with him and his friend Terry in their 65-Story Treehouse-the fifth book in the illustrated middle-grade series filled with Andy and Terry's signature slapstick humor!

Andy and Terry live in a 65-Story Treehouse. (It used to be 52 stories, but they keep expanding.) It has a pet-grooming salon, a birthday room where it's always your birthday (even when it's not), a room full of exploding eyeballs, a lollipop shop, a quicksand pit, an ant farm, and a time machine...which is going to be really, really useful now, since Terry messed up (again) and the treehouse just FAILED it's safety inspection. Join Andy and Terry on a whirlwind trip through time as they try to stop the treehouse from being demolished!

Praise for the Treehouse series:

"Will appeal to fans of Jeff Kinney and Dav Pilkey . . . The wonderfully random slapstick humor is tailor-made for reluctant readers . . . A treat for all." -Booklist on The 13-Story Treehouse

"Middle-grade boys in particular will get a huge chortle out of this book, and there is enough going on to support classroom discussion about physics, chemistry and other physical sciences. The story is simplistic enough to appeal to reluctant readers, but amusing enough to hold better readers' interest." -Children's Literature on The 52-Story Treehouse