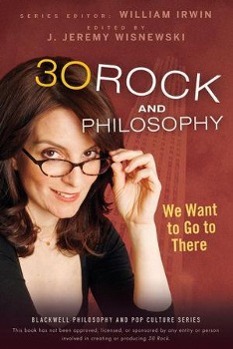 30 Rock and Philosophy: We Want to Go to There

A fascinating exploration of the philosophy behind NBC's hit TV series, 30 Rock

With edgy writing and a great cast, 30 Rock is one of the funniest television shows on the air--and where hilarity ensues, philosophical questions abound: Are Liz Lemon and Jack Donaghy ethical heroes? Kenneth redefines "goody two shoes", but what does it really mean to be good? Dr. Leo Spaceman routinely demonstrates that medicine is not a science, so what is the role of the incompetent professional in America today?

In 30 Rock and Philosophy, Tina Fey and her fellow cast members are thrust onto the philosophical stage with Plato, Aristotle, Kantand other great thinkers to examine these key questions and many others that involve the characters and plotlines of 30 Rock and its fictional TGS with Tracy Jordan comedy show.
* Takes an entertaining, up-close look at the philosophical issues behind 30 Rock's characters and storylines, from post-feminist ideals to workaholism and the meaning of life
* Equips you with a new understanding of Liz Lemon, Jack Donaghy, Tracy Jordan, Jenna Maroney, Dr. Spaceman, and other characters
* Gives you deep and meaningful new reasons (who knew?) for watching Tina Fey and your other favorites on 30 Rock

Ideal for both casual and diehard fans, this book is the essential companion for every 30 Rock­-watcher.

Acknowledgments: Thanks for Helping Us Go to There.

PART ONE What Would Oprah Do? Ethics and the Good Life at 30 Rock.

2 Sour Lemon: Liz's Workaholism and the Meaning of Life (Jeffrey A Hinzmann).

3 Friendship on 30 Rock: What a Greek Philosopher Can Teach us about Companionship (Daniel Yim).

8 Medicine's Not a Science: Dr Leo Spaceman and the Role of the Incompetent Professional in Today's America (Kevin S Decker).

9 Is There a Difference between East Coast Television and Microwave Ovens?: Moral Questions about Corporate Management (Andrew Terjesen).

10 The Emancipation Corporation: Loving and Loathing the Shinehardt Wigs of the World (Nick Michaud).

14 One City's Cheese-Curl Addict Is Another City's Model: A Question of Taste (Michael Da Silva and Melina Found).

Appendix 2: The Wisdom of the Page: Meet Kenneth Ellen Parcell.